I’ve been having really bad sleeping habits since I’ve come to university, and this is the second time that I’ve considered that I might be getting an odd insomnia… or else I’m actually well rested for someone in a radically different time zone.

I blame it on not having classes most days until after noon.

I’m fairly used to staying up until midnight, and even past that… what I’m not used to is sleeping in after those times.

It means that  after those times, I feel well rested rather than tired and willing to go to bed early to make up for my long night.

This is me, staring at a wall before I actually fall asleep... or me when I ave bad sleeping patterns. This is just me.

See, the highschool way of life includes a parent, and at least for me, a parent who a lot of times was hard to get up (though, credit where it’s due, Mom was getting up on her own fine by grade 12) and who also gives me a ride to school.

Anyway, I can get up in those instances because I have a sense of needing to BE somewhere, and then there’s the fact that I’ll likely be tired enough at night to go to bed at 10 or so.

It is a rather good balance.

But not here, not when I don’t have classes in the morning except for on Fridays now. Not when I even have Tuesdays off entirely.

No, my body gets used to a sleeping schedule that would be useful if I lived in, say, Cuba perhaps.

So, as I did about a month and a bit ago, I stayed awake through the night, and now it’s nearly 5pm at night. Yesterday I woke up at 12:30.

But if I sleep now, I’ll wake up at about 5am and have to do this bloody awful technique again.

How does this work?

Well, if I stay awake until about 10 or so, maybe 10:30, then my usual staring-at-the-wall-for-an-hour pre-sleep tradition will have to be put aside, and I will be out before you can say “tired yet?”

Lexy has shown me a couple of good sleeping exercises, breathing exercises that help lull the mind into IT’S.TIME.TO.SLEEP.NOW state, but having been stupid and having gotten a Second Cup Egg Nog latte (that has caffeine in it, surprise surprise), last night I couldn’t sleep.

I had hot milk with some honey in it.

Nope. Not enough to counteract a small Egg Nog latte.

Why couldn’t I wait for my Egg Nog until December?

Oh, right, I don’t want to wait. Because I’m a self-hater apparently, to put myself through this again.

You have no clue how tired I am right now O.O

But back to the explanation, I’m out like a light, I set my alarm for 8, and then that means I have 10 hours of sleep and I wake up at a good time so that I actually get things done at times other than 3am in the morning.

I don’t think I’ll make it this time though…

It’s stupid to get to this point, I don’t suggest it to anyone, and I’ll likely take a short nap since my class (ONLY CLASS) tomorrow is at  4 and I can handle sleeping in to 11 or so.

To any and all who attempt this, do it on a weekend or something, or friday night…

And don’t listen to slow music.

I think that’s what broke me this time, as I’m going to post this and then go take a nap.

DON”T DO THIS TO YOURSELF! 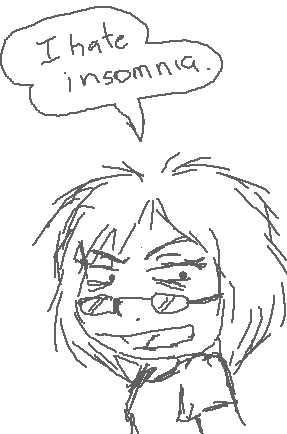 This wasn't drawn by me, but looks a lot like me, and has my sentiments exactly. I will eventually figure out my scanner 😐