So, for those who have patiently (or not, you could have just been laughing at my poor luck in roommates) read through my roommate complaints (HERE Read from bottom up to get the by-date of things), you will know that they eat my food, are generally untidy, and I share a bathroom with The Sasquatch, who, to my disgust, leaves hair behind in the shower and in the sink instead of footprints and blurry photos.

But, just now, I believe I have given my own revenge..

Before you get grossed out, please read the title of this post and then see just how creatively gross you could get with pink foam.

I don’t want to do it myself, so I’m just going to say that I am going for confused more than grossed out.

Specifically, what I look like, and narrowing that down to my hair.

BTW to those who will not give up on me getting my revenge by doing something gross, no, this is not about shaving either.

I don’t usually dye my hair, and what I have done has been pretty tame considering the ideas most people have about artists.

The dark tips weren’t that noticeable, as that was what I wanted, the blonde-er streaks were noticeable with my hair being much longer, and, though not as immediately noticed (in an “she’s streaked her hair” noticeable way), the two peek-a-boo streaks have been pretty cool.

They would probably be much more noticeable if they were normal streaks (on the top layer), rather than streaks applied to a ear-level layer of hair. They ‘peek’ through.

When I was little I was a big fan of Ed, Edd, and Eddy. 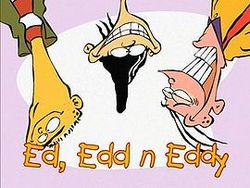 If you are familiar with the old show, you will get references to a plank, and you will also remember that there were three older girls called the Kankers who each had a crush on one of the three Eds.

Lee likes Eddy, Marie likes Edd, May likes Ed, and I freely admit that I had a cartoon crush on Edd (the middle from the picture above) 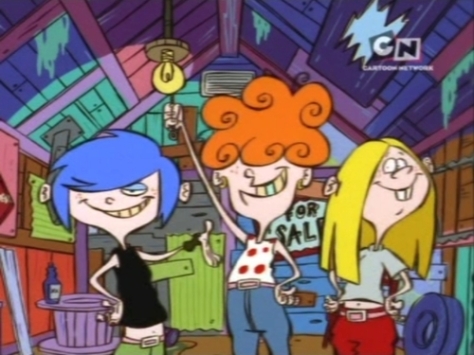 I desperately wanted to have blue hair.

I would only stop asking after Mom finally told me that since I was Blonde (ie. yellow hair) if I dyed my hair blue, it would turn Green.

But peek-a-boo streaks are a far cry from full our blue hair, but at some point I may decide I want to, you know, see what my parents reaction to electric blue hair would be.

Maybe have an ambulance on speed dial, in case they take it rougher than I thought.

But back to pink foam.

For those who don’t dye their hair (often, or at all), you can either go for a normal dye or you can go for something that’s more of a stain.

The stain, from what I can tell, is a more vibrant colour, but doesn’t stay as long as a normal dye.

I wanted something a bit more funky, interesting, and hey, the purple had faded enough since I had it done that I decided that, when I was having my hair appointment this family day weekend/reading week, if I was going to have my streaks redone, bright pink wouldn’t look out of place.

So I got the stain.

Wow, that sounds a bit like an omen of doom, similar to the dreaded Black Spot, but maybe less pirate-ey and more…

Not the stain! Not the pink stain!

Who knows, maybe it was the result of that stray red sock in a wash of whites.

But one thing I noticed the second time I was in the shower after having the stain done is that it came out a bit when you were shampooing.

I’m sure it happened the first time I was showering after I had it done, but I only noticed it this time.

But it was only today, when I guess after a more vigorous scrub of my hair that I noticed the pink foam on the walls of the shower did I think of revenge.

I’m going to stop here a moment, and tell you that I’m laughing to myself at the idea of looking at pink foam on shower walls and thinking “Revenge! Bwahaha!”… but I’m also kind of smiling to myself because I wonder at how many people thought of something a bit more gross than… well… this.

Once again I ask that you look at the title of this post, and if you were hoping at the beginning of his post for some vindictive bit of nastyness from a 19-year-old with roommate problems, well, you will have to wait for one of them to push me past my boundaries a fair bit farther to get me to make a mess that I may have to clean up.

Or try to outlast one of my less than clean roommates in NOT cleaning up.

But oh! When I noticed the pink foam lasting on the walls of the shower, Insanity perked up and loved the idea of The Sasquatch’s confusion.

Revelled in the idea of him being so confused as to what, exactly, it could be, this pink foamy stuff on the wall of the shower, cackled in delight when even Sanity couldn’t give an explanation that would make sense without hair dye knowledge, because that would mean that thought could go to one conclusion…

That it must be something gross.

It doesn’t matter that it’s foamy like soap (exactly like soap), it was pink and strange… and foreign.

What could I have possibly done with this strange pink foam in the shower?

The horror of an unknown gross an girly thing will haunt him every time he even thinks of having a shower!

So I flicked more soap onto the shower wall, finished my shower while taking the unusual care not to wash off the foam from the wall, and got myself ready for class.

Later, when I noticed something amiss, I was given another delight, though a rather bittersweet one.

One of my earrings, in my second set of ear piercings, had fallen off.

It was cheap, with a plastic cap acting as a ‘pearl’ and I knew it would eventually break or get lost, but still, I was walking around with only three earrings in, and even if no one else noticed, I knew.

And Sanity said that I must’ve lost it in the bathroom.

But likely the bathroom.

And Insanity reared up with manic delight and said

If you do not know the pain of stepping on an earring with a bare foot, you are more likely to know how painful it is to find a Lego piece in the dark, and it is a similar pain. 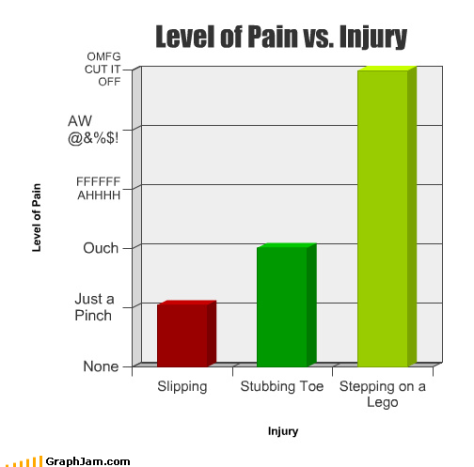 Except that with an earring there’s a possibility that you’ll poke a hole into your foot, like I did when I was 15.

But it’s my revenge for millions of tiny hairs and other nastyness around the apartment res, and I still imagine Insanity cackling gleefully next to Sanity.

And I know that even Sanity has a smile.

And that is Revenge via Pink Foam.

EDIT: As a bonus, I found this video. It’s things you wouldn’t want to hear from a roommate.

EDIT 2 : For an update on what has happened with my revenge, look HERE and be prepared for childishness.