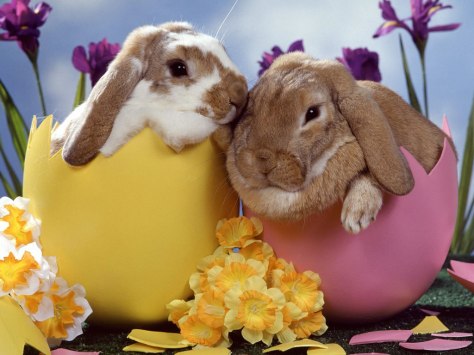 I don’t know how it is for other families, but mine never seemed to try to convince me about the Easter Bunny.

I believed in Santa Clause, yes, but the parents seemed to try with that one, and succeeded, but trying to convince me that the Easter bunny was real…

The baskets with chocolate happened, appearing in the living room in the morning, but I remember finding the stash of chocolate to go into those baskets before.

Easter was a belief that walked hand in hand with the Tooth Fairy.

I would, when I lost a tooth, go up to Mom or Dad and present them with the tooth so that they could make sure that the money would happen.

If it was from them giving it to a fairy, I didn’t much care, but I wanted the money so I could either put it in my piggy bank or so I could buy pixie sticks or something.

I’m fairly certain that when hiding the plastic eggs that they had filled with chocolate, it was more for the game or it.

It wasn’t like having a number of gifts labeled “From Santa”, no, it was more like a way to earn the chocolate that would be split between me and my sisters, and then rationed throughout the next month to last.

It was a chance for Mom and Dad to sit back and have us search in ‘turns’ for an egg, yet another holiday that meant we were barred from the living room, it was a holiday that was sort of like Halloween except that you got the day off school and you didn’t have to walk for candy.

It was magical, for sure, and it still is now even when it’s going on about whose ‘turn’ it is to be the Easter Bunny in the house.

That meant that you were the one who went to Bulk Barn for the loot.

Quite possibly it was the overused picture of the cartoonized bunny hiding eggs in a field that made belief impossible. Our eggs were hidden in our living room. I never found eggs outside.

But, my rambling about a holiday with a magical being in it that we weren’t forced/cajoled into believing in aside, I want to know if anyone else had this?

Did anyone else joke like you’re actually 20 years older than your 7 year old self about the Easter Bunny having come?

Do you (if you’re a parent) try your best to feed this belief that a rabbit deposits chocolate for you once a year?

Just me being curious.

P.S. Lexy, I think we have bunny ears from an old Halloween costume somewhere...

Belated for Christmas, or really holiday time in general, but figured I’d get this out there.

When I was home for the holidays during Xmas 2011, a great deal of my walking at night with Lexy was aimed towards talking about various things, making fun of dog and what we imagine dog would say with his ever-changing imaginary voice, and, since it was that time of year, looking at what lights and what kind of effort our neighbours and distant neighbourhood neighbours had put up for the season.

There were houses that looked like Holiday Cheer had reached its drunken limit and threw up on their lawn. Sometimes that holiday cheer ended up on parts of their houses, too.

There were houses that had a concentration of brightness, of lights that would zig-zag and bundle itself into a concentrated portion of the house. These houses would attract your attention even as you didn’t want to burn your eyes looking directly at it. “Isn’t that a nice house–BRIGHT!DON’TLOOKATTHEDOOR!BRIGHT!–and they even decorated…”

There were colour themed houses. My sister and I looked at two houses side by side, one with orange/red and yellow lights concentrated around the entrance, and the house directly next to it spread out in sprawled squiggles in blue and green. The contrasts in the double houses–the huge buildings cut in half to house two separate families– were especially amusing when we saw done in the calm chilly blue-white lights on one half and furious and fiery red lights on the other.

There are also the inflatable things… I’m not terribly fond of these things, for a number of reasons that are beside the fact that they look mostly stupid. They aren’t new anymore, so there are a lot of houses where even the Holiday Cheer couldn’t get drunk all over their lawn–there’s no room to. If you have a front lawn that isn’t particularly large, you shouldn’t be trying to fit three of the gigantic inflatable things… I also don’t like that they use up so much energy just having air pumped into them, and if they’re punctured, most people throw then out–more garbage, thanks…

Some are amusing, and when they first came out I thought hat they were held upright due to the sheer amount of awesome that had been pumped into their creation.

On walks, Lexy and I would occasionally stop for a bit to appreciate the blow up things on people’s lawns.

This year, we had another reason to stop and stare. And smile. Sadly didn’t get around to going back at night, but here’s a picture of what we saw: 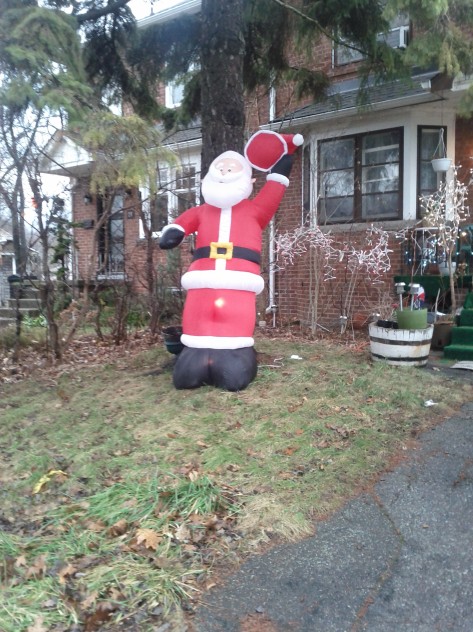 You can't help but look at it, can you?

If this had been taken at night, I have no doubt that it would be even more… spectacular…

Lexy has mentioned that she saw a Rudolf blow up thingy, equally unfortunately lit.

I just hope that children who walk past won’t see anything abnormal, and will be too focused on how awesome and blown up that Christmas decoration is.

Though, I’d like to think that the people who own this house didn’t keep it up if they noticed the unfortunate light. I know my parents would have noticed, and would have taking it down.

Have to say though, that was the most memorable Christmas display (seems like the wrong word to use for some reason) from this past year.

Happy belated holidays to all, and in honor of my Wiccan friend, a very belated Merry Samhain and Yule.

BONUS: Samhain is pronounced Seh-my-ah (not sam-hain as I’d once thought) and always occurs on October 31st for the Northern Hemisphere.

FOR MORE INFORMATION ON WHEN WICCAN HOLIDAY ARE in year 2012: http://www.holidays.net/calendars/religions/dates2012-wiccan.htm