He’s adorable, and chubby, and very different attitude-wise than Gwynn.

I’m not saying he’s unfriendly, no, but it’s mostly in body type.

And also commands, but that’s something else entirely.

He’s just short and stout… I actually think his ears are longer than his legs. (For visual, I’m pretty sure he’s some sort of Corgi mix. Pictures later perhaps.)

His People gave us his stuff for the time they’re gone, and included in that is his bed… That he apparently doesn’t really use as a bed. 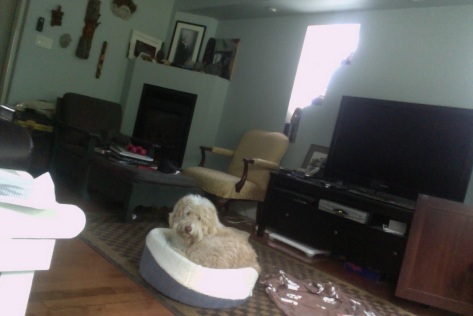 Dis is my bed now. I love to curl up on and in things too small for me. It proves I *am* in fact a lap dog. Pet meh.

But… The other night I had some friends over to bake and start watching Doctor Who… K has seen some of the series, but not enough to be a Whovian, form a mix of watching some scattered episodes and from the inevitable spoilers from Tumblr.

But I’m not certain that Doctors 9-11 will happen this summer, not sure if there’s going to be enough time for her to catch up in time for November, so we’re dealing with only 11 right now.

It’s good. We watched 1 episode. I was happy. my Dr Who merch at my side… 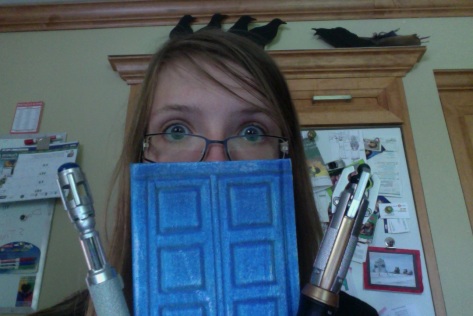 Yeah, but afterwards, when they left, I had some time to see Calvin and Gwynn interacting… here are my notes:

I switched focus somewhat part way through, but it’s all good.

Oh, and in case you were wondering, baking this time was much less frustrating than last time. I did very little of the mixing and everything. I just put things on sheets, and provided the ingredients.

No stress. And then Dr Who, so it was all good.